Kath Tsakalakis became involved in gun violence prevention after sitting in on a school board meeting and learning about lockdown drills.

As a British immigrant to the U.S., and now as a U.S. citizen, Kath was surprised that it took her nearly 15-years to “wake up to gun violence.” She was shocked to learn both teachers and students practice active shooter drills. This prompted her to research organizations that address this issue. Kath supports Brady “because of the mission, strategic focus on practical initiatives, and the can-do approach.”

Kath finds hope in the overwhelming support from a majority of Americans for background checks on gun sales. As she puts it, “since when do 90% of Americans agree on anything?” She believes Americans are becoming increasingly aware of the likelihood that a gun in the home is more likely to be used in suicide or accidentally than in self-defense. She believes gun violence in the U.S. is a self-made tragedy.

Regarding the Second Amendment, Kath believes that gun laws save lives and they fit into the framework of the constitution. She points to other countries as examples where guns are still accessible, but with necessary precautions.

Kath points out “that 70% of crime guns in Mexico trace back to America — we are a terrible neighbor. We need consistent, common-sense laws across the entire country.” Kath’s family is mostly scattered in Chicago and San Francisco. While these cities have made efforts with gun violence prevention, they are not insulated from the lax gun laws in the states neighboring them.

When Kath is not volunteering for Brady she can be found riding a horse. Kath competes as an “amateur jumper” in local shows and has gotten her kids to ride horses as well! 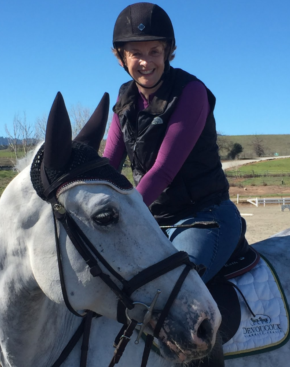