"It was at that moment I felt I could no longer sit on the sidelines. I looked up Brady online and got involved."

Josh is one of the founders and current principal of the Business of Sports School (BOSS), which teaches students the foundation of business and entrepreneurship along with academic subjects. BOSS gives many inner-city students in New York City, who might not have completed high school, the opportunity to graduate with both academic and business skills and a personal mentoring network in the sports community.

Josh serves on Brady's Regional Leadership Council in New York. As he tells it, "I got involved in the gun safety movement because I was tired of reading and hearing of the gun lobby manipulating the facts to sell more guns, even though public opinion was firmly behind reasonable limits that would increase safety, without limiting access."

Josh continues, "One night, several years ago, a gun lobby telemarketer called me and asked for my support on relaxing limits on gun sales in New York City. I said that I was proud of the decrease in gun deaths in the city due in part to strict state and city rules. She replied that Chicago had strict rules but experienced carnage. I cut her off saying that's because of loose gun laws in the bordering states like Indiana and Wisconsin. That's when she hung up on me. It was at that moment I felt I could no longer sit on the sidelines. I looked up Brady online and got involved."

As a principal, Josh knows that school shootings are a real and everyday fear. He also knows that gun violence is a racial equity issue with minority communities particularly affected: "Many of my students live below the poverty line and gun violence is ever present. A number of families have had parents or other relatives killed."

Long term, Josh remains hopeful because of the youth activism that he sees everyday. He adds, "High school students now are much more enlightened than my generation — they care about social and racial inequities, including gun violence. When they see injustice, they speak up, and I know that they will fight hard for changes that can save lives."

Josh, who lives with his wife and three children in Manhattan, is looking forward to traveling again when the COVID crisis is over. Meanwhile, he entertains himself with crossword puzzles and family movie nights. 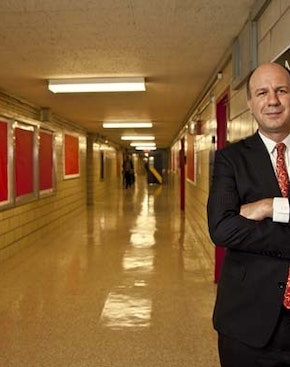