Following a tragic weekend of gun violence in America, people across the country are asking themselves “what can I do to stop this?” We at Brady know the solutions — we need our senators and representatives to have the courage and conviction to act.

Now's your chance to make sure they take action and are held accountable! We are proud to announce that we will be hosting a Weekend of Action on August 17-18 in collaboration with other gun violence prevention groups! Together, we will keep the pressure on Senate Majority Leader Mitch McConnell and President Donald Trump to call legislators back to DC to vote on common-sense gun safety legislation.

So far, Senator McConnell has said he will not call Senators back to Washington, but that gun violence prevention measures will be on the table when the Senate reconvenes after August recess. In the meantime, that means hundreds of more American’s will be impacted by gun violence until they return.

We cannot wait any longer! We're calling on Americans from across the country to take action in their communities by participating in rallies, contacting elected officials, and making their voices heard so that action is taken now! 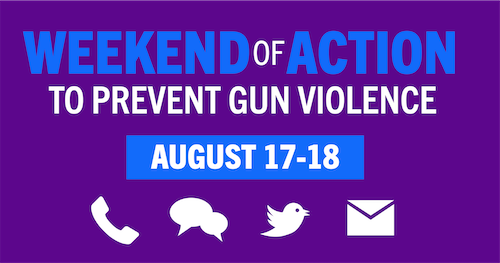