Music artists GRiZ and Matisyahu wrote “A New Day” just days after the mass shooting at Marjory Stoneman Douglas High School in Parkland, FL. Brady and Team ENOUGH were proud to partner with the performers for the powerful music video, which features stories from real people whose lives have been impacted by gun violence.

"A New Day" is just the latest in GRiZ’s history of using music to address important social issues. He previously produced a song in support of the LGBTQ organization, It Gets Better. This time around, GRiZ partnered with Brady, looking to connect with people impacted by gun violence and ensure his viewers had an avenue for action.

GRiZ took the time to talk with Brady about why it was important for him to address gun violence and create the video for “A New Day.”

Your music often deals with difficult topics and the overall ups and downs of life, but what made you specifically want to focus on the effects of gun violence in “A New Day?”

I think it’s an important dialogue to have. The issues surrounding gun violence aren’t something everyone wants to talk about, but I figured that if I could package them thoughtfully into dance music, I could more easily communicate them to my generation. We can make a difference – let’s keep up the conversation. I do that with music.

You were raised in North Detroit and now are based in Denver, both of which have faced their own share of gun violence. Did you personally experience gun violence in your life or was it something you ever had to think about growing up?

I never saw it in my life as a child and cannot imagine having your innocence robbed from you after witnessing something like that. Things need to continue to change for the peaceful. 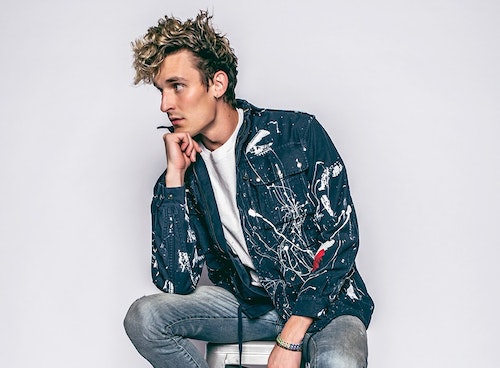 The issues surrounding gun violence aren’t something everyone wants to talk about, but I figured that if I could package them thoughtfully into dance music, I could more easily communicate them to my generation.

In the past year, we’ve seen huge momentum particularly amongst young people, who want to see action taken on this issue in a way that’s reflected in your song — “a new wave, it’s a new day/visions of a new generation, for the youth we fight for salvation” — how have these young people inspired you to be vocal on this issue?

I'm just doing what I can. What I feel in my heart is right. I think these kids are doing the same. Empowered by technology and social connectivity. Activism is important, and art can support that movement. I'm here for that.

Gun violence disproportionately impacts particular communities, including the LGBTQ community. Did this influence your decision to create “A New Day?”

I know that suicide by guns is the largest percentage of deaths amongst the LGBTQIA community, which is just really sad. Controlling gun access isn't the entire solution to our culture’s suicide crisis, but it definitely plays a role, a role I’d like to be a part of.

What do you hope to accomplish with this new video?

Inspire people to care. Social issues are left in the dark until we shed a light on them. We can be that light in the dark.

What would you say to all of those out there who have been impacted by gun violence or simply want to help prevent more gun violence?

Take action... TODAY. Get involved. Best way to start is by doing research. Brady is a great resource for information and social/political action.

Join Team ENOUGH!
Activists age 25 and under can sign for Brady’s Team ENOUGH to join young activists creating change and working to end gun violence.
https://teamenough.org/join...
Back to Blog