The Government Shutdown Keeps Guns in the Hands of Domestic Abusers

As a consequence of the government shutdown, now in its fifth day, the Violence Against Women Act (VAWA) expired on December 21 at midnight. This little-talked about consequence of the government shutdown is continuing to endanger the lives of women. In 2016, 4.5 million women in America reported that a domestic partner threatened them with a gun. American women deserve better than this!

VAWA is being held hostage because of the spending fight, and one of the provisions of VAWA languishing in limbo is a proposal to restrict partners under restraining orders, or convicted of stalking or dating violence, from having access to firearms. Proposed by Rep. Sheila Jackson Lee earlier this year, reauthorization would have closed an enormous loophole currently allowing domestic abusers access to guns they can use to commit acts of violence against their partners.

VAWA has long been authorized on a bipartisan basis, and this year there was hope that the so called “boyfriend loophole” would close, preventing individuals with a proven history of domestic violence and/or stalking, access to guns.

The statistics on the casualties from domestic violence are staggering. This year alone more than 500 people have been killed during a domestic violence incident involving a gun. Roughly every 16 hours a woman is shot and killed by a current or former intimate partner. If a gun is present in the home when a domestic violence incident takes place, the risk of homicide increases by 500%. The toll on unmarried women is particularly staggering. Since 1980, the percentage of murders committed by non-married domestic partners has skyrocketed from 27% to 49%. Women in the United States are 11 times more likely to be murdered with a gun compared to their counterparts in other high-income nations. In one of the most deadly examples, an estranged husband with a history of violence opened fire on his soon-to-be ex-wife and the friends she had gathered on a Sunday to watch football. The rampage left a total of eight people dead. Even more tragic is that these stories are not unique.

Despite their violent past, it is still far too easy for domestic abusers to get guns: 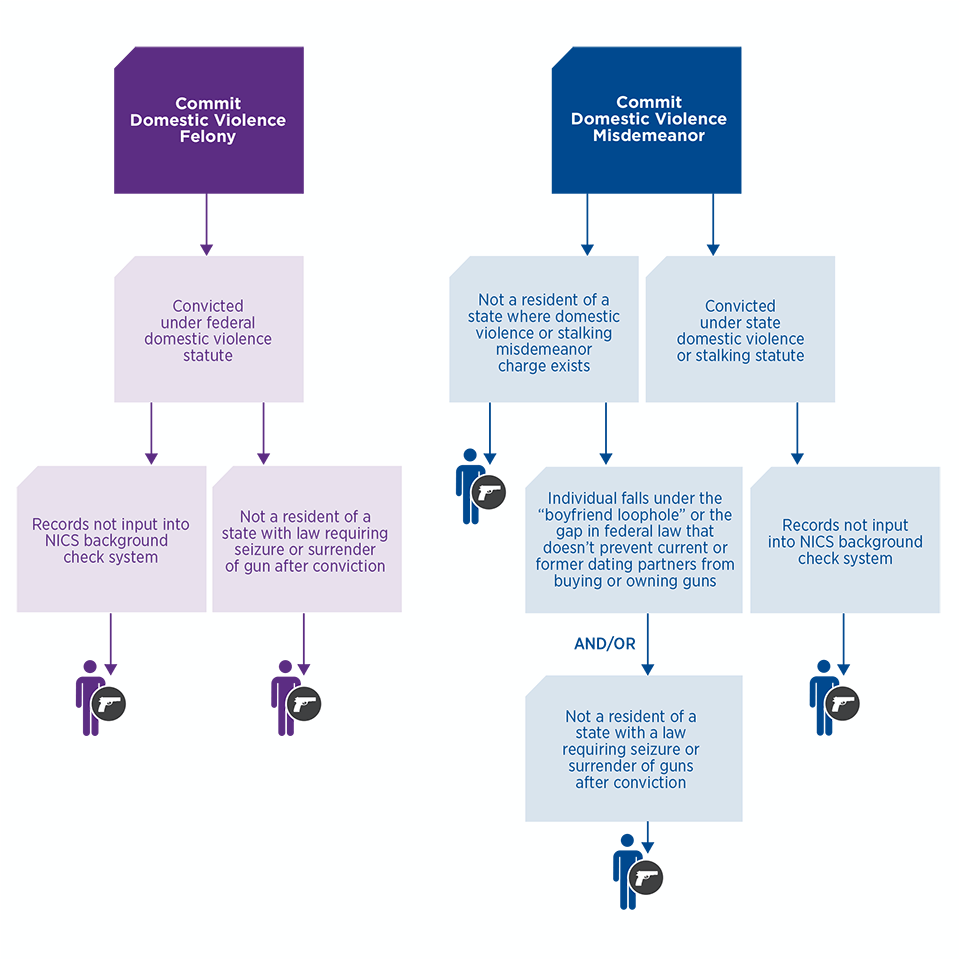 It is important that these loopholes be permanently closed. Convictions for a misdemeanor crime of domestic violence represents the third-most frequent reason for a denial of an FBI-conducted background check, only behind a felony conviction and outstanding arrest warrant. However, denial for misdemeanor abuse or stalking is not universally implemented in all states. To prevent further injuries and deaths Brady calls upon Congress to close these loopholes through reauthorization of VAWA.

Thanks to the strong work of our supporters and grassroots activists, we now have a gun violence prevention majority in the House. This positions us to make an even bigger impact next year by permanently closing loopholes that allow domestic abusers access to guns. I hope you will join us in advocating for common sense gun laws to protect abuse victims.

Read Our Report
Back to Blog