Mass shootings have become an epidemic in our country. There is much debate on their cause and how to prevent them. But we know the solutions — and we must act. 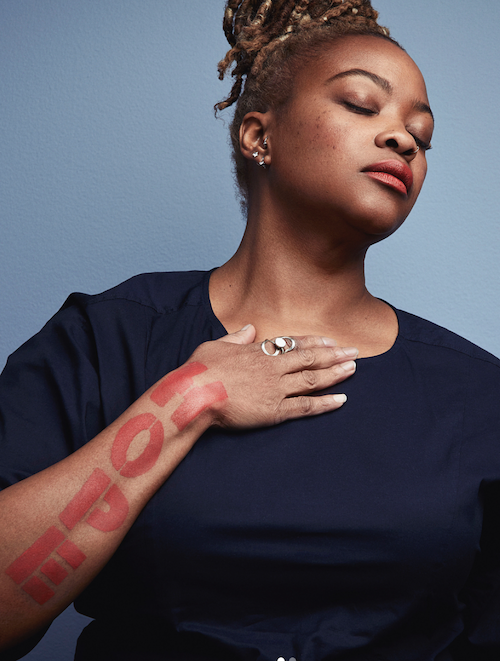 Sherrie Lawson photographed by the Lipstick Lobby Fired Up Campaign (2018)

On September 16, 2013, I went to work at the Washington Navy Yard as I had done for over a year. I walked into building 197 and remember seeing Mike Ridgell, our security guard, out of the corner of my eye. Months ago, I began making a point to say hello or smile at him when I came in each morning because I felt like he had a thankless job and wanted him to know I appreciated him. However, on this warm, overcast morning, I rushed to my desk without acknowledging Mike.

Mike was gunned down that day.

By 8 a.m., I was at my desk checking email and found an email from Sylvia Frasier; we were working on an IT project together. I scribbled a note to myself that I needed to call her after the meeting.

Sylvia was gunned down just a few minutes later.

When we heard the first shots around 8:20 a.m., we thought it was someone dropping tables in the atrium, and a few seconds later we heard another round of gunfire. Still not convinced that it was gunfire, we went to investigate. Even though we were working in a secured facility on a military base in the capital of the United States, which should have been one of the safest places in the U.S., there was a group of people stampeding by the office doorway screaming at us to “RUN”. I joined the group of people running as more gunfire echoed behind us.

We ran to one side of the building and an officer told us to run the other way. We sprinted the opposite way and came upon another officer who yelled and pointed, “The other way! Run the other way!” Never had I seen an officer look so panicked; her expression would be seared into my memory forever. We turned around and ran toward the back of the building where there was a gate. While we ran, the gunshots were getting louder and louder. Later, I learned that the gunman was behind us.

Because the gate was locked, we began stacking construction pallets next to the 8-10 foot brick wall that surrounds Navy Yard so we could climb over. Was this a terrorist attack? We had no idea. We just knew we needed to get to safety.

After climbing the pallets, we reached the other side of the wall and heard a very loud gun shot. I ran with a group up the Anacostia river walk towards the Washington National Stadium. We entered a building on M Street, out of breath and panicked. M Street had been locked down, and we were told to remain in the building until further notice.

When it was determined that there was no more danger, we were allowed to leave the building. I spent the rest of the evening surrounded by friends, mainly in shock and in a hazy reality that would become my new normal for many months.

The next day while journaling in a local coffee shop, I learned the names of the victims. Michael Arnold, Kathy Gaarde, John Johnson, Arthur Daniels, Richard ‘Mike’ Ridgell, Martin Bodrog, Vishnu Pandit, Kenneth Proctor, Mary Knight, Gerald Read, Frank Kholer, and Sylvia Frasier were murdered by a shooter who walked in the main entrance of a military base with a sawed off shotgun.

The shooter was a former Navy sailor who was cited on eight occasions for misconduct. He had previous gun-related arrests, yet he was granted a clearance that allowed him to work on a military base in a secured facility. Those working in Building 197 were mainly civilians who went to work one day and never returned home. Those who did make it home were forever changed.

Read our report on the mental health impact of mass shootings.

For survivors of mass shootings, the daunting mental and physical tolls do not stop after the shooting. Up to 95% of people exposed to shootings experience symptoms of PTSD in the early days after the incident, and most feel the psychological effects of the trauma months later.

As a result of what I experienced on that day, I was diagnosed with PTSD, severe anxiety, and major depressive disorder. I experienced severe panic attacks, nightmares, and hypervigilance. I was hospitalized for cardiac abnormalities, and a year after the shooting I experienced a mini stroke caused by a tear in my right carotid artery. The stress of the trauma took a massive toll on my body. Due to my health challenges, I had to leave my job and withdraw from my doctoral program. I eventually had to file bankruptcy because of medical debt and my inability to work for over a year after the mini stroke.

It has been five years, but sometimes it feels like it happened yesterday. My healing journey has been full of different types of therapies, medications, and support from family and friends. I joined The Rebels Project, a nonprofit that provides support for survivors of mass tragedy, and am now their Director of Development, which has been incredibly healing for me.

Mass shootings have become an epidemic in our country. There is much debate on the causes of mass shootings and how to prevent shootings. One factor that cannot be denied is that guns are the common denominator in each of these tragedies.

Our nation cannot continue to only debate this issue. We must act.