RSVP Now: "The Second Amendment and the Courts" 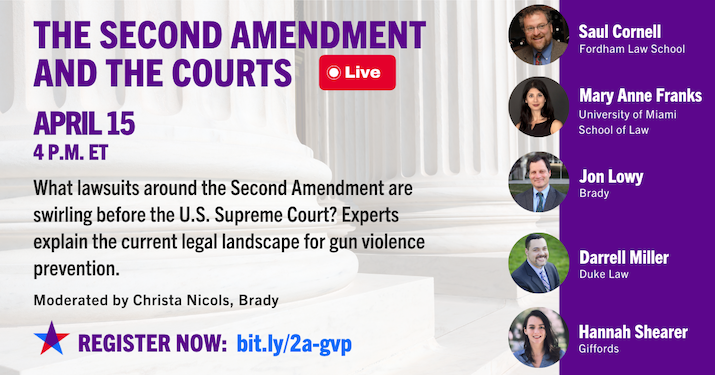 What lawsuits around the Second Amendment are swirling before the U.S. Supreme Court? Experts from Brady, Giffords, and more will explain the current legal landscape in the fight to prevent gun violence.

For decades, the NRA and gun lobby have tried to use the courts to secure their profit margins by pushing for a radical reinterpretation of the Second Amendment. Their interpretation of the scope of the right to firearms is not only ahistorical but also reckless, threatening longstanding gun safety laws and our democracy. Recently, we won against an NRA lawsuit that threatened to roll back more than 300 state gun safety laws across the country. But that ruling was made before we lost the balance of the Supreme Court. Now, we’re waiting imminently as the Supreme Court has signaled they will soon take up another Second Amendment case.

We’ll discuss the legal battle over the scope of the Second Amendment, the cases that could be heard by the Supreme Court’s new post-Heller majority, and more.

Jonathan Lowy is Chief Counsel and Vice President of Brady Legal. Jon has spent more than 20 years representing victims of gun violence in lawsuits to reform dangerous gun industry practices and assisted governments and public officials in defense of reasonable gun laws. Named as one of the nation's 500 leading lawyers, Jon has litigated in over 40 states to reduce gun violence, including winning several landmark trial and appellate rulings, settlements, and verdicts. He is a graduate of Harvard College and the University of Virginia School of Law.

Dr. Mary Anne Franks is a professor of Law and Dean’s Distinguished Scholar at the University of Miami School of Law, where she teaches First Amendment law, Second Amendment law, criminal law and procedure, and law and technology. She also serves as the president and legislative and tech policy director of the Cyber Civil Rights Initiative. She is the author of the 2019 book The Cult of the Constitution: Our Deadly Devotion to Guns and Free Speech. Dr. Franks earned her doctorate and master's degree in Modern Languages and Literature from Oxford University, where she studied as a Rhodes Scholar, and earned her J.D. from Harvard University.

Hannah Shearer is Litigation Director at Giffords Law Center. She joined Giffords as a staff attorney in June 2016. As the leader of Giffords Law Center's constitutional litigation program, Hannah works to develop lawsuits advocating for gun violence survivors, litigates challenges to dangerous gun policies and regulatory inaction, and serves as defense counsel in actions challenging local gun laws under the Second Amendment. Hannah also coordinates the organization's efforts to track gun safety laws in the courts and analyze the impact of federal judicial nominees, and she manages Giffords Law Center’s amicus brief program, in which legal experts participate in crucial firearms litigation as “friends of the court." Hannah regularly provides information and commentary on the Second Amendment, the courts, and state firearm laws to media outlets, policy advocates, and the academic community, and is the author of Giffords Law Center’s Post-Heller Litigation Summary, a comprehensive survey of Second Amendment decisions issued by state and federal courts since 2008. Before joining Giffords, Hannah worked as a litigation associate at Munger, Tolles & Olson LLP in San Francisco and as a law clerk to Judge Paul J. Watford of the US Court of Appeals for the Ninth Circuit. She received her undergraduate degree from Yale University and her JD from Stanford Law School.

Saul Cornell is the Paul and Diane Guenther Chair in American History at Fordham University and adjunct Professor of Law at Fordham Law School. Previously, Dr. Cornell was a professor of History at the Ohio State University, where he also directed the Second Amendment Research Center at the John Glenn School of Public Policy. He has authored and co-authored numerous books, including A Well-Regulated Militia: The Founding Fathers & the Origins of Gun Control in America, which won the David J. Langum, Sr. Prize for the best book in American legal history in 2006. Dr. Cornell has authored the chapter on the right to bear arms in the Oxford Handbook of the US Constitution, an influential reference work in American law. His most recent article on the Second Amendment and the history of gun regulation is History, Text, Tradition, and the Future of Second Amendment Jurisprudence: Limits on Armed Travel under Anglo-American Law, 1688–1868 83 LAW AND CONTEMPORARY PROBLEMS 73-95.

Darrell A. H. Miller writes and teaches in the areas of civil rights, constitutional law, civil procedure, state and local government law, and legal history. His scholarship on the Second Amendment has been published in leading law reviews such as the Yale Law Journal, the University of Chicago Law Review, and the Columbia Law Review, and has been cited by the Supreme Court of the United States and in congressional testimony and legal briefs. With Joseph Blocher, he’s the author of The Positive Second Amendment: Rights, Regulation, and the Future of Heller (Cambridge University Press, 2018) and is co-faculty director of the Duke Center for Firearms Law. Miller graduated cum laude from Harvard Law School and attended Oxford University as a Marshall Scholar.

The Brady Legal team has submitted amicus briefs in every major gun case over the past 30 years. We've argued and won before state supreme courts, trial courts, federal appeals courts, and more, securing $50 million in verdicts and settlements for victims of gun violence. 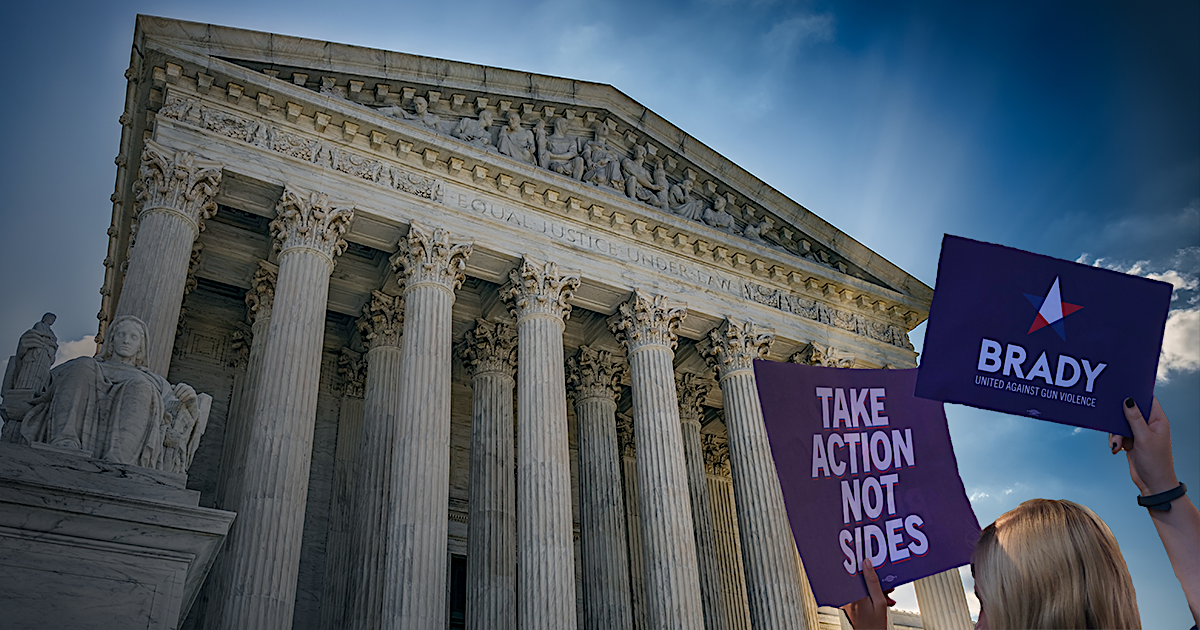