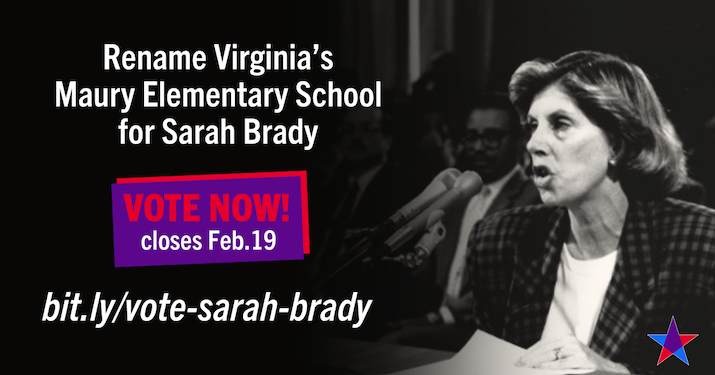 Sarah Brady passed round one of voting and was announced as a semi-finalist in the renaming of Maury Elementary School in Alexandria, Virginia — but we need your vote one last time. Voting ends February 19 at midnight. Simply follow the link below, select "Community member," choose "Sarah Kemp Brady Elementary School" (3rd on the list), and click submit!

As Brady supporters know, Sarah Brady made it her life’s mission to prevent gun violence after her husband, White House Press Secretary Jim Brady, was shot in the head during the 1981 assassination attempt of President Ronald Reagan. Following years of intensive recovery for Jim, he and Sarah maneuvered the halls of Congress to advocate for bipartisan solutions.

The original Brady Bill was introduced in 1988, and after six votes, over seven years, and three presidencies, Sarah and Jim finally declared victory on November 30, 1993, when President Bill Clinton signed the Brady Bill into law, establishing the Brady Background Check System for gun sales!

Since then, nearly 4 million prohibited purchasers have been blocked from purchasing a firearm — helping save countless lives. The Brady Background Check System was tested the most in 2020 following record-breaking gun sales caused by the coronavirus pandemic. But because of the Brady Bill, federally licensed gun dealers were prepared to stop prohibited purchasers from buying a firearm — even during record-high sales.

Following the passage of the Brady Bill, Sarah continued to advocate for common-sense gun reform at the local, state, and federal levels for the remainder of her life, focusing on safe firearm storage, suicide prevention, banning assault weapons, and more.

What many Brady supporters don’t know is that before Sarah’s decades of gun violence prevention advocacy, she was a dedicated public school teacher in Alexandria, Virginia. Living the majority of her life in Virginia, Sarah grew up attending Virginia public schools. She attended George Mason Elementary, Jefferson Junior High, and Francis C. Hammond High School. After she graduated from the College of William & Mary in Virginia with a degree in Elementary Education, she returned to ACPS Ficklin Elementary School in Alexandria, Virginia, to teach at a newly integrated elementary school, where she was a fierce advocate for racial justice. 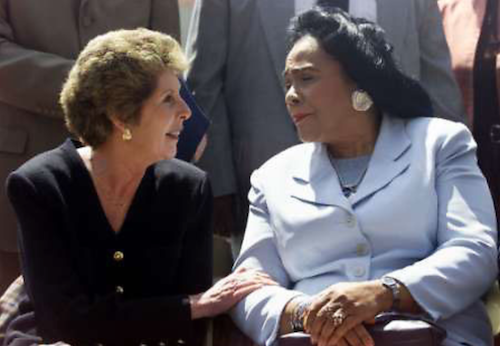 While Sarah passed away on April 3, 2015, her memory and her legacy live on in Brady's work and in the transformative gun violence prevention policies she inspired that continue to save lives today. Her tireless work as a gun violence prevention advocate and her strong connection to Virginia makes her the ideal candidate for the renaming of Maury Elementary.

So, we are asking for your support once again: Help us honor our hero and namesake by voting to establish Sarah Kemp Brady Elementary School! If you've already voted, please share the poll on Facebook with your friends and family. It takes only 30 seconds to honor Sarah’s legacy for a lifetime.