Honoring the Past While Moving Forward

We’re carrying forward the spirit of Jim and Sarah Brady.

Brady’s rebranding is part of an evolution — not just of an organization, but of two people. Jim and Sarah Brady dedicated their lives to public service early on, Sarah worked as a political aide and Jim served as press secretary for the Reagan White House. Through it all, they carried with them a love of our country and a vibrant appreciation for life. (Jim’s humor knew no bounds; he famously even poked fun at his boss. President Reagan, to his credit, appeared to appreciate his jokes.) 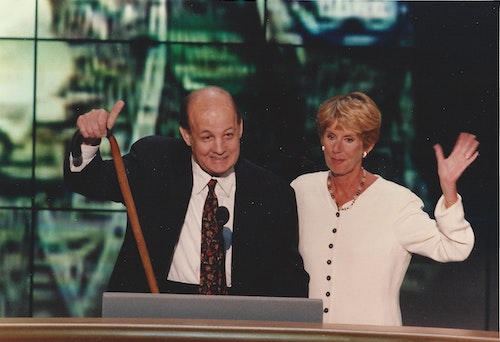 After Jim was shot, he and Sarah spent years dedicated to his health, helping him recover so he could continue to live a full life. But Sarah recognized that it wasn't just Jim’s life that needed saving: America was victimized by weak gun laws and an out of control gun lobby that put us all at risk. So she turned to what is now called Brady — which at the time was called Handgun Control Inc. and the Center to Prevent Handgun Violence.

Even then, in the early 1980s, Brady was already the oldest and most influential gun violence prevention organization in America. Sarah went from volunteering to serving on the board and then became Board Chair. In 2001, the organization was renamed as the Brady Campaign & Center to Prevent Gun Violence in honor of Jim and Sarah’s work. There was a political evolution, too: though lifelong Republicans, Jim and Sarah spoke at the 1996 Democratic Convention after President Clinton signed the landmark Brady Law and Assault Weapon Ban — legislation that the Brady organization had led the fight for.

Jim and Sarah would have loved Brady’s new slogan, “Take action, not sides.” After all, they lived it.

In fighting to end gun violence, Jim and Sarah saw past politics. They recognized that all that mattered was supporting sensible and urgent measures to prevent gun violence, an issue they knew all too well. Brady’s new logo represents the cross-aisle work that Jim and Sarah did — the red and the blue uniting as purple. That was Jim and Sarah, crossing aisles and caring little for party affiliation. Political pragmatists that they were, they knew that solutions can only be achieved when we find middle ground. The organization Sarah led, that led the biggest advances in gun violence prevention over the past 50 years — Brady — lives that, too. We have one goal and one goal alone: prevent gun violence.

A bullet to the brain could not silence Jim Brady, or render him humorless. A lifetime of caring for a grievously injured husband could not stop Sarah from fighting for all of us — it only inspired her. Our new look exemplifies where we come from, and where we’re heading as an organization. Its vibrant colors speak to life and all its variance and beauty — which is why we at Brady fight every day for the right of Americans to live it. And the red and the blue star captures unity.

We’re uniting all Americans in our mission to end gun violence — young and old, liberal and conservative, fed up and fired up. We hope you’ll join us.

Jonathan Lowy is Brady’s Vice President of Legal. A friend of Jim and Sarah’s since joining Brady in 1997, he leads Brady’s legal work to fight for victims and survivors of gun violence.