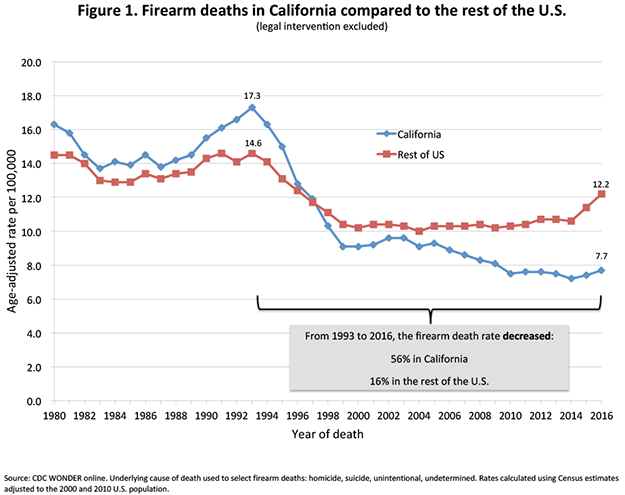 Gun laws work. California’s are a good example. During the 1980s and early 1990s, California’s firearm mortality rate was consistently higher than the rate in the rest of the country (i.e. the U.S. population excluding California). But since the 1989 Stockton schoolyard shooting, the many California Brady/Million Mom March Chapters and their allies have passed over fifty laws regulating firearms in the state.

California’s gun laws were a major reason for this reduction. (The state’s non-firearm homicide and non-firearm suicide rates declined far less. And, although some have argued that California’s Three Strikes law was the reason for the state’s decline in crime and firearm mortality, careful research has discredited this.*)

Many of California’s laws were intended to reduce gun homicides and gun crimes by denying felons and other dangerous persons access to firearms, without preventing purchases by law-abiding citizens. Other laws were designed to prevent gun suicides. These included safe storage laws, waiting periods, and background checks to deny guns to people who are a danger to themselves or others, and to those under a restraining order.

By 2013 California had a lower firearm mortality rate, and specifically lower gun homicide and lower gun suicide rates than the rest of the country.

California’s law requiring background checks for all firearm sales—including sales by private individuals—is among its most effective regulations. By contrast, most other states require background checks only for gun sales made by federally licensed gun dealers.

This same private sales loophole exists at the federal level and therefore, according to the U.S. Dept. of Justice, “individuals prohibited by law from possessing guns can easily obtain them from private sellers and do so without any federal records of the transactions.”**

But the gun lobby and its supporters in Congress oppose comprehensive background checks. This policy failure comes with costly, criminal, traumatic and deadly consequences for many Americans.

If the rest of the U.S. could reduce its firearm mortality rate to California’s rate, in 2013 alone, over 8,800 Americans would have lived instead of dying by gunfire.***

Griffin Dix, Ph.D., was Research Director at MacWEEK and founded a research company. After his son, Kenzo, was shot and killed in 1994, he was president of the California Brady Campaign Chapters and represented the national Million Mom March chapters on the Brady Campaign Board. He is now Co-Chair of the Oakland/Alameda County Brady Campaign Chapter and lives in Kensington, California. Loren Lieb of the San Fernando Valley Brady Chapter helped compile this information and created the graph.