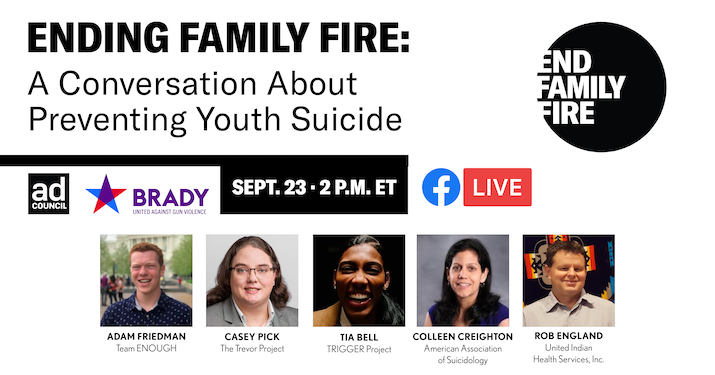 In the U.S., suicide is the second leading cause of death among young people ages 15-19. We don't talk enough about youth suicide, and, when we do, we often don't acknowledge the intersectional identities that uniquely affect Black, LGBTQ, and indigenous youth. Moderated by Brady President Kris Brown, we're convening experts from communities impacted by youth suicide, including representatives from Team ENOUGH, The Trevor Project, The TRIGGER Project, The American Association of Suicidology, and the United Indian Health Services.

As President of Brady, Kris Brown combines a lifelong background in policy, law, and grassroots activism with considerable strategic management expertise to help forge the direction of the organization’s programs and ensure the successful impact of its national and field assets. A veteran of gun violence prevention work, Ms. Brown started her career on Capitol Hill working for Rep. Jim Moran, advocating for the bill that would eventually become the groundbreaking Brady Bill requiring background checks on federally licensed gun sales. Ms. Brown has also served as the Chief Legal Officer to a publicly traded company based in Switzerland and as a lawyer practicing at the law firm Weil, Gotshal & Manges. She lives in Arlington, VA, with her two teenage daughters.

Adam Friedman is a student in the class of 2022 at George Washington University, where he studies political science and applied ethics. He currently oversees Team ENOUGH’s federal and state lobbying collective programs. Before his time on Team ENOUGH’s executive council, Adam served as the North American Social Action Vice President for NFTY, the Reform Jewish youth movement. He also serves as the Vice President of Education for his university’s sexual violence prevention organization, SASA. Adam has been involved with gun violence prevention since 2012, when it affected his family directly. He is passionate about activating his peers, and has a track record of organizing young leaders to build networks of change. Adam hopes to continue expanding Team ENOUGH’s lobbying work in order to pass lifesaving legislation.

Rob England (Yurok), MA in Psychology and Bachelor of Arts degrees in Psychology and Native American Studies, is the Health Promotion Manager for United Indian Health Services in Arcata, CA. His experience includes twenty years in Indian Country in a variety of roles including facilitating suicide prevention and wellness trainings, enhancing educational opportunities for tribal members, increasing cultural knowledge, and advocating for youth and families in the juvenile justice and child welfare systems.

Casey Pick is the Senior Fellow for Advocacy and Government Affairs for The Trevor Project, where she works to advance state and federal policies that support LGBTQ youth in crisis. She strives to educate policymakers and the public about LGBTQ youth/mental health issues, especially Trevor’s 50 Bills 50 States campaign to end conversion therapy. She also writes and coordinates Trevor’s amicus briefs, collaborates with state and local advocates, and testifies in support of legislation to protect LGBTQ youth.

Casey was also active in various state marriage equality campaigns, fighting Proposition 8 in California and both Maine campaigns in 2009 and 2013. Casey’s work has been featured in The Advocate, US News & World Report, The New York Times, NPR, and MSNBC. Casey holds a bachelor’s degree in Government from Claremont McKenna College and a juris doctorate from the UCLA School of Law. She split her time growing up between Southern California and Iowa City, Iowa, and currently shares her Alexandria, VA apartment with five guitars, a banjo, and a ukulele.

Colleen Creighton joined the American Association of Suicidology in June 2017.

Previously, she served as Executive Director of the Alliance for Consumer Education (ACE), a nonprofit foundation dedicated to the safe and responsible use of consumer household products. She also served as Director of CHPA Educational Foundation where she was responsible for overseeing the day-to-day management of the Consumer Healthcare Products Association’s educational foundation.

Prior to her work in the nonprofit foundation arena, Ms. Creighton worked in the educational field, having taught civics education at the elementary, middle, and secondary levels. Additionally, she spent three years in Lancut, Poland working for the International World Teach program, an organization based out of the Harvard University Center for International Development. Before that, she studied NATO and the European Union at the Irish Institute for European Affairs in Leuven, Belgium.

Colleen holds a B.A. in Political Science from the Catholic University of America and a M.A. in East European Studies from the Freie Universität Berlin in Germany.

Tia Bell became familiar with the struggles of at-risk youth early in life as the oldest child of an adolescent mother in Washington, D.C. Overpowered by crime, defeat, and disadvantage, 7 out of 9 Adverse Childhood Experiences (ACEs) were experienced before the age of 10-years-old. By the age of 17, gun violence caused dozens of loved one's pain or silence including her own mother, who is a survivor, and her late uncle. In Tia's determination to find significance in life's pain, she found peace on the court winning Gatorade Player of the Year in 2006 and 2007 while attending HD Woodson Senior High School and earned an invitation to serve as a scholastic member of the Wolfpack Women's Basketball Club.

In 2011, Tia received her Bachelor’s of Science in Sport Management from NC State University. Following multiple acute knee injuries that ended her basketball career, Tia was afforded the opportunity to become the first in her family to complete high school, college and now pursue a Master’s degree. It was during this difficult shift that she discovered herself and her calling to serve the young.

Tia has gained meaningful experience in undergraduate admissions, college access, school counseling, coaching, and gun violence prevention. As the Founder of FOuR, LLC, and The T.R.I.G.G.E.R. Project, today she lives to end gun violence through youth development, cultural responsiveness, and socio-emotional learning. In this light, youth are positioned to create and design solutions of holistic healing for the youth, from the youth.

Register now!
Back to Blog