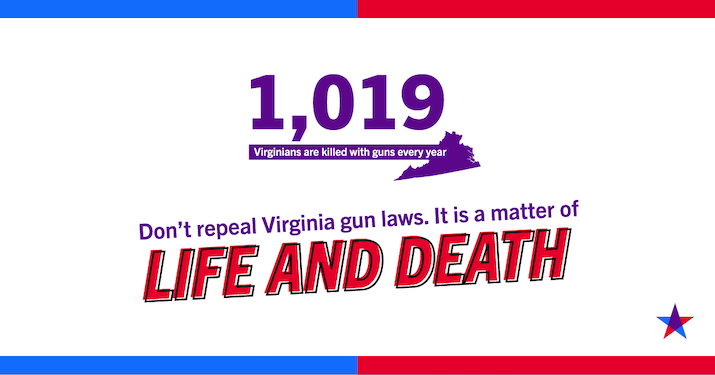 The majority of Virginians support common-sense gun violence prevention policies. But new, life-saving laws are at risk of repeal. We’re urging Virginia state senators to #StandWithVirginia and represent the will of the people!

Over the last two years, Virginia has seen an epidemic of gun violence worsened by the COVID-19 pandemic, which has disproportionately impacted communities of color. Despite these challenges, the Virginia General Assembly has delivered the will of the people and created a safer Virginia by passing an entire slate of gun violence prevention bills.

Virginia’s best defense to rising gun violence is protecting the state’s comprehensive set of evidence-based policies that are proven to save lives. But right now, these lifesaving laws are at risk of being repealed. They’re under threat by newly elected anti-gun sense legislators, including a new House majority that is self-interestedly catering to the gun lobby over their constituents.

We can’t roll back Virginia’s life-saving progress. We’re uniting to urge state senators to reflect the will of the people and protect Virginia’s hard-won progress in preventing gun violence. The facts speak for themselves:

Fighting the dangerous repeal of any of Virginia's sensible gun violence prevention laws is a matter of life and death, period.

Read on to learn how you can #StandWithVirginia!

Raise your voice and #StandWithVirginia

Here's how you can take action now to protect our safety

We have the chance to ban the sale of ghost gun parts and kits in Virginia. Please urge your Virginia delegate to vote YES on SB 310!
Email your delegate!

Send a tweet! Look up your Virginia state senator to add their social media handle to your post.

@VASenate: The majority of Virginians support common-sense gun violence prevention policies. Please represent the will of the people and protect our life-saving gun safety laws! #StandWithVirginia #VAleg
Tweet this

Tag your friends and fellow Virginians to join you in advocating for a safer Commonwealth free of gun violence.
Post to Facebook

Tag @VASenate and your state senator to either thank them for protecting progress or ask them to put safety first.
Download our graphics

Record a short video and post to social media. (Sample script below)

My name is _____. I’m part of the Virginia gun-sense majority. Virginians like me are urging legislators not to roll back our progress to prevent gun violence. Please, #StandWithVirginia and represent the will of the people. Voters will remember. We're counting on you.
After you record, share on Twitter
Download our social media toolkit!

What’s at stake? These common-sense gun violence prevention laws, which have already been at work saving lives:


According to polling, 73% percent of Virginians support extreme risk laws, also known as a “red flag” law. Virginia’s landmark new law established a civil court process to temporarily remove access to firearms from an individual at risk of harming themselves or others. Research shows that extreme risk laws prevent gun homicides and suicide, with one study finding that one life is saved for every 10-20 ERPOs issued.


“One handgun a month” laws like Virginia’s are crucial in preventing illegal bulk purchases by straw purchasers. A repeal of this law would escalate gun trafficking into neighboring states, which is exactly what happened in 2012 when Virginia’s one-gun-per-month law was repealed. According to ATF trace data, 533 guns originating from Virginia were recovered in Maryland in 2014 and by 2020, that number grew to 1,070.

It’s abundantly clear that a repeal of this law would once again escalate gun trafficking into neighboring states.


A new Virginia law increased the penalty for recklessly leaving a loaded, unsecured firearm around children under the age of 14. Research shows that child access prevention laws, like Virginia’s, are effective in preventing gun deaths and injuries among children.

Expanded background checks on gun sales, as supported by 86% of Virginia voters


Under Virginia’s new universal background check law, prohibited gun purchasers – like people with felony records or those convicted of domestic abuse – can no longer bypass background checks by purchasing guns online, at gun shows, or from unlicensed sellers. A new law also expanded the amount of time Virginia State Police have to complete background checks from 3 to 5 business days, ensuring prohibited purchasers are less likely to get their hands on deadly weapons.


A new gun violence prevention law prevents the purchase and possession of firearms by individuals convicted of assault and battery of a family or household member. Another new law expands these kinds of protections outside of family members. We know that the presence of a firearm during a domestic dispute makes fatal injury 12 times more likely than disputes without firearms.

Repealing these protections would put survivors and victims of domestic violence at greater risk.


Communities thrive when they are able to respond to their own needs. Repealing this law would weaken the power to enact sensible, community-driven solutions to prevent gun violence across the Commonwealth.

Thank you for taking action alongside Brady! Want to continue your life-saving advocacy? Join a Brady Virginia Chapter in your community.