Every day the Senate fails to strengthen our nation’s gun laws, more than 300 people are shot and more than 100 are killed with guns. Join us in demanding senators act upon life-saving legislation passed by the House.

Make no mistake, the Senate's inaction is lethal. About 60,000 people have been killed with guns since the House passed universal background checks a year and a half ago. Amid growing rates of gun violence across America, we cannot continue to let either of these life-saving bills continue to languish before the Senate.

Ask them to support legislation to pass universal background checks and ban assault weapons. If they already do so, ask them to urge Senate leadership to immediately bring it to a vote.

We know that constituent calls to senators are especially effective, so we need to get loud! Before calling, please check our charts below to see where your senators stand on both bills. That way you can be sure to share the right message.

IF YOUR SENATOR HAS NOT YET COSPONSORED THE BILL:
Please urge them cosponsor immediately.

IF YOUR SENATOR ALREADY COSPONSORED THE BILL:
Ask them to urge Senate leadership to immediately bring this life-saving legislation to a vote.

Ready to make your voice heard? Let's go! To call about universal background checks, text "CHECKS" to 866-89. To call about banning assault weapons, text "AWB" to 866-89. We'll call you back to connect you directly to your senator's office.

Does Your Senator Support the Background Check Expansion Act?

Does Your Senator Support the Assault Weapons Ban? 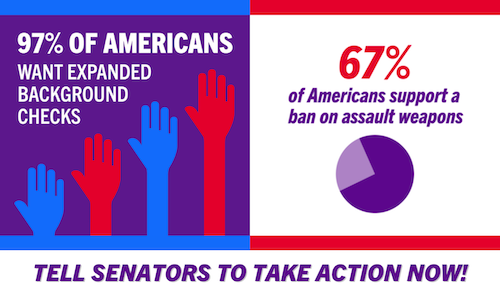