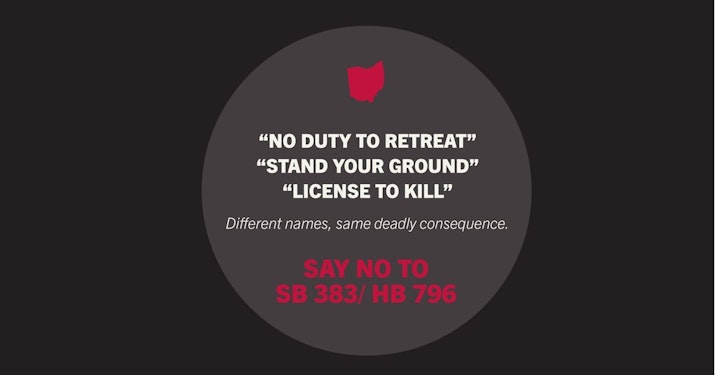 Ohio state legislators want to pass SB 383, an NRA-backed bill that would legalize murder in Ohio.

Join Brady and voice your opposition to SB 383 now!

A committee of Ohio state legislators have passed SB 383: an NRA-backed "no-duty-to-retreat" bill that would legally allow Ohioans to shoot and kill another person anywhere they feel threatened — rather than making any attempt to retreat from the conflict. This is by far one of the most dangerous bills we’ve ever seen introduced in Ohio.

In Florida, where the state implemented a similar law, one study by the American Medical Association found that the law led to a 32% increase in gun-related homicides. We cannot allow the same in Ohio. The only “duty” legislators should be focused on right now is passing sensible, evidence-based laws that will prevent gun violence — not laws proven to cause gun homicides.

Join Brady right now and voice your opposition to SB 383 before it advances any further in the Senate.

To make a phone call, please enter your information in the form. After you hit "submit," we will call the cell phone number you entered and patch you through to Ohio state legislators. Thank you for your advocacy in the fight to prevent gun violence in Ohio!

Enter your phone number and information below. We will call your phone and patch you through to Ohio state legislators.