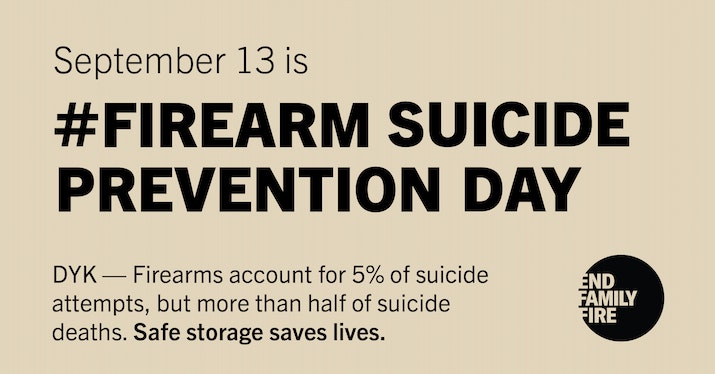 Firearm Suicide Prevention Day, part of Suicide Prevention Month, was created to educate about America's growing firearm suicide crisis and promote the importance of storing firearms safely and securely — which means locked, unloaded, and separate from ammunition — as an essential component of suicide prevention.

Firearm suicide is a growing public health crisis in America. On average, we lose 65 people to firearm suicide every single day — which is more than are lost to firearm murders and unintentional shootings combined. More than half of all gun deaths are suicides. Research shows this outsized epidemic is partly fueled by unsecured firearms. Firearm suicide is a part of “family fire,” or a shooting involving an improperly stored or misused gun in the home that results in death or injury.

If you or someone you know is contemplating suicide, call or text 988 or visit 988lifeline.org to reach the free and confidential 988 Suicide & Crisis Lifeline.

Join me in observing the first-ever #FirearmSuicidePreventionDay on September 13. Gun suicide is a public health crisis in America, making up more than half of all gun deaths. Together, we can ensure guns are stored safely and save lives. 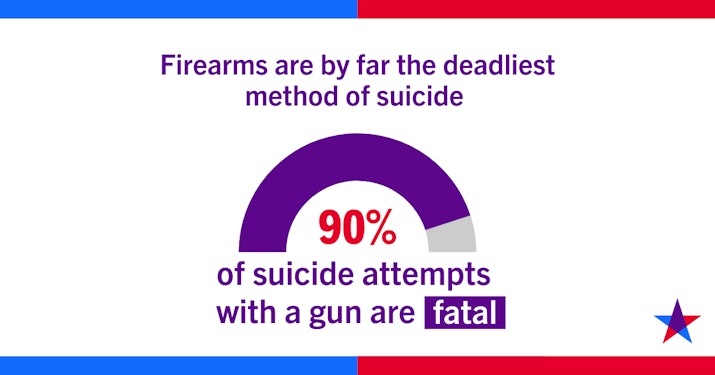 About the connection between suicide and safe firearm storage

Research shows that safely storing guns unloaded, locked, and separately from ammunition can prevent suicide and save a life.

America’s deadliest shootings are the ones we don’t talk about. We lose 65 people to gun suicide every day. These tragedies can be prevented. When you practice safe firearm storage, you could save a life. #FirearmSuicidePreventionDay

HOW YOU CAN TAKE ACTION

Join @bradybuzz and @endfamilyfire at 3 p.m. ET on Tuesday, September 13. We will be joined by suicide prevention expert Dr. Mike Anestis of the New Jersey Gun Violence Research Center and more to discuss research-based solutions. Use hashtag #FirearmSuicidePreventionDay.

Our End Family Fire program has been seen by millions and is not only changing how we store our weapons, but also reaffirming that responsible gun ownership saves lives.

People impacted by gun violence can experience ongoing trauma, including a high risk of suicide. These resources identify ways to support those in need.

Ask, “Is there an unlocked gun in your house?”

If you know someone who is in crisis and at risk of harming themselves or others, ask, “Is there an unlocked gun in your house?” It’s a simple question, but it has the power to save a life.