Gun sales are surging. Unregulated ghost guns are flying off the shelves. Gun stores are refusing to close for public safety. And all the while, the Trump administration is siding with the gun lobby, putting profits over people. Here's what's happening, including how you can urge your legislators to act.

The gun industry thinks it's above the law. This has long been the case, but this self-interest is especially threatening when America is facing a pandemic. While businesses everywhere are closing for public safety, the gun industry has been pushing to keep gun stores open — even encouraging panic-buying and using fear about coronavirus to increase gun sales. In short, they want to sell as many guns as possible — and that means they're putting gun lobby profits over people. Even when governors have demanded gun stores to close, many gun sellers have refused to obey. And all the while, the Trump administration has prioritized gun industry interests ahead of public safety. 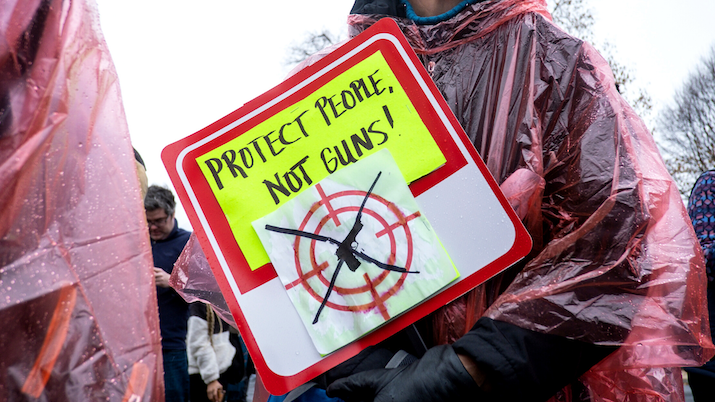 Urge your state and local legislators to act!

An Influx of New Gun Owners and More Guns in Homes

The coronavirus pandemic is sparking record gun sales. In February, the number of background checks conducted by the National Instant Criminal Background Check System (NICS) increased by 36% compared to February 2019. This number went up again in March, with a 40% increase compared to last year and 3,740,688 background checks initiated — more than any other month since the system launched in 1998. These surges in gun sales are happening at a time when many firearm training courses have been suspended.

Anecdotal evidence shows that “ghost guns” are also flying off the shelves amid the pandemic. Ghost guns are designed to avoid all gun laws. They're untraceable, unserialized, and available to buy online without a background check. They look and function like any other firearm, but they can be made in your home. This criteria is exactly ghost guns are a growing weapon of choice among people who are legally prohibited from buying guns. Lack of federal oversight around ghost guns means we don't have hard data around their sales. However, retailers across the country are reporting that they're struggling to meet increased demands during the pandemic. 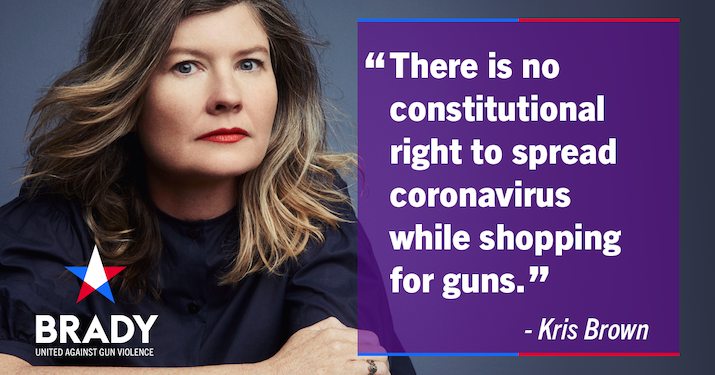 How the Trump Administration is Aiding the Gun Industry

The Trump administration thinks gun stores are "essential" businesses during a pandemic. This designation reeks of gun lobby influence. Make no mistake, there's no constitutional right to spread coronavirus while shopping for guns.

It didn't take long for the Trump administration to side with gun lobby interests. On March 28, just weeks into the pandemic, the U.S. Department of Homeland Security (DHS) issued a memo that deemed gun stores "essential" under the coronavirus outbreak. This designation was just a recommendation. But especially when the gun lobby was issuing lawsuits against governors who acted responsibly to close gun stores, the federal guidance could deter state officials who might otherwise seek to implement closures.

Let's be clear, gun stores are not a part of America’s “critical infrastructure.” And local officials are well within their rights to temporarily close gun stores in an effort to protect public safety. Please join us in urging Trump and DHS to rescind this reckless guidance!

In response to the DHS guidance designating gun stores as "essential" businesses, Brady filed a Freedom of Information Act (FOIA) request to obtain documents pertinent to the gun industry’s efforts to influence this decision. We already know that The National Shooting Sports Foundation (NSSF) submitted an official letter to the DHS asking for this guidance. The guidance also came one day after the NRA, along with gun owner groups, filed a lawsuit against California Gov. Gavin Newsom and other officials for deeming gun stores non-essential businesses and ordering them to close.

On April 10, the Bureau of Alcohol, Tobacco, Firearms and Explosives (ATF) issued guidance that allows a “drive-up” window for gun transactions. This new guidance poses many safety risks. First, it makes it more difficult for gun dealers to screen for straw purchasers, or those who illegally purchase a firearm for another person’s intended use. Straw purchases are one of the primary ways in which guns are diverted from dealers to prohibited purchasers and other individuals for criminal use. What's more, the ATF's new guidance could inhibit the ability of gun dealers to capture transactions on video surveillance, opening the door for gun trafficking and other criminal activities. Lastly, amid numerous reports that calls to suicide prevention and domestic violence hotlines have spiked, ATF's guidance makes it more difficult for gun sellers to see the in-person signs of domestic abuse or harm that prevent life-endangering purchases from occurring.

The ATF has communicated that gun dealers are the first line of defense to prevent the diversion of guns into the criminal market. Licensed gun dealers are one of the most credible messengers to inform gun owners about the ways that they can properly secure their firearms — locked, unloaded, and with ammunition stored separately, inaccessible to children. Current ATF-approved selling methods inhibit the ability of these dealers to effectively share this information with customers and provide the support that we know saves lives.

Elected officials have a job, and it's to protect the interest and safety of constituents. Especially amid an emergency like a global pandemic, we believe that public officials have the authority and constitutional power to require gun stores to close as deemed necessary to stop the spread of the coronavirus. Exercising that emergency authority does not infringe on Second Amendment rights.

Let's be clear, the Second Amendment does not create a free-standing right to sell guns. As courts have made clear time and time again, imposing conditions and qualifications on gun sales is presumptively lawful, as is limiting gun sales based on important public safety concerns.

While the Second Amendment may imply a right to acquire guns in some circumstances, there is no constitutional right to buy guns immediately. The Supreme Court and other, lesser courts have repeatedly held that all rights are constrained when lives and public safety are at stake.

Bottom line: Temporarily closing gun stores is justified to protect Americans’ most fundamental right: the right to live, free of needless threats to health and safety.

The U.S. Department of Homeland Security (DHS) issued guidance designating gun stores, shooting ranges, and other portions of the gun industry as “essential” businesses. What does it mean?
Learn More

In response to fear related to the COVID-19 pandemic, American gun dealers and online retailers have reported an increase in sales, especially by first-time gun buyers.
Listen now!